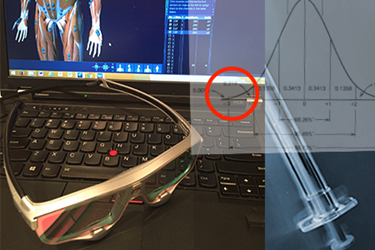 Often, the last thing on the minds of drug development teams working on a new generation of large-molecule biologics is the human factors engineering (HFE) performance of the drug delivery devices that will ultimately deliver their innovative medications to patients. Yet, such an oversight can cause major delays in delivering these new medications to market. Recent human factors research has revealed several special considerations that, if not handled properly, can cause serious problems related to delivery of these amazing new medications.

These new drugs are, by definition, based on synthesis of complex large molecules, which results in solutions that are often far more dense and viscous than traditional medications. This increase in drug viscosity has a direct and serious impact on patients’ ability to successfully deliver such medications utilizing accepted delivery platforms, including pre-filled syringes (PFS), auto-injectors and on-body injectors.

Several recent HFE studies examining simulated viscosity levels equivalent to those projected for the new large-molecule drug formulations suggested that a significant  percentage of patients within certain target patient groups were unable to successfully deliver the simulated drug due to an inability to apply the sustained force necessary to expel the drug from delivery devices. Prior to such HFE analysis, the drug development team believed that a standard configuration PFS delivery device would be sufficient for delivery of large-molecule drug formulations. However, this detailed HFE analysis determined that delivery via traditional PFS drug delivery device would yield drug delivery failure rates too high to pass FDA validation testing criteria.1 Fortunately, most of these HFE studies were conducted prior to purchase of production lines and device inventories for several new large-molecule drugs, so adjustments could be made in the design of the drug delivery system to ensure successful HFE performance levels.

The increased device manipulation forces required to expel large-molecule drug formulations is even more problematic for certain patient populations, specifically those who exhibit coordination and strength limitations caused by their clinical state. For such patient populations, it may be nearly impossible for the percentile range of users specified in FDA-recognized HFE guidance standard AAMI/ANSI HE75 (i.e., 5th percentile female to 95th percentile male) to exert the force necessary to successfully self-administer the large-molecule drug formulation using a PFS.2 Such issues are exacerbated when patients do not allow the device to warm properly prior to injection, which increases the force required to expel the medication.

Additional complications may arise with patients who exhibit cognitive impairments, such as diminished time estimation and decision-making abilities, which may impact their ability to use the PFS according to the instructions for use (IFU).

Accordingly, teams developing large-molecule drugs must apply rigor when executing formative and summative studies, and most importantly, when submitting for FDA HFE validation. In some cases, redesign of the PFS interface may be necessary to accommodate functional and cognitive limitations of intended users. In extreme cases, in which it is determined that self-administration is not possible for an intended user group, it may be necessary to limit delivery of the new medication to only HCP-moderated procedures and delivery methods.

Another critical HFE factor related to delivery of these new biologics via standard configuration PFS is an increased level of subjective pain experienced by patients during the drug delivery process. Increased subjective pain during drug delivery arises due to two factors: 1) hand tremors caused by high drug device activation forces and 2) extended injection times as a function of increased viscosity of the drug (more on injection time in a moment). In combination, these two factors can produce significantly higher levels of injection pain for certain patient populations during delivery of large-molecule drugs using traditional PFS devices.

Unfortunately, increasing needle diameter to offset high force activation levels only increases patient pain at the point of delivery. Ultimately, assuming large-molecule drugs can be delivered via traditional PFS devices may be a serious oversight that results in failure to meet FDA guidance related to HFE performance and drug delivery success for users.

Such a long delivery time can often lead patients to remove the auto-injector from the injection site early, causing them to not receive the complete dose. This is an especially prevalent problem for patients who have significant prior experience with more traditional auto-injectors that deliver less-viscous drugs in shorter times, due to negative learning transfer. Resolving such issues requires carefully written and tested IFUs and training.

It is critical for drug development teams to understand that PFS and auto-injectors previously used for delivery of small-molecule drugs may not be appropriate for the new generation of large-molecule drugs. Failure to test whether intended users can utilize such devices to deliver large-molecule drugs early in the device system development process may cause serious delays in getting the drug to market, due to HFE validation data failing to meet FDA performance criteria.

Many of these same HFE problems apply to the new generation of on-body injector devices. Such devices are actually more complex than PFS and auto-injectors because they often require advanced audio and visual status indicators that may be confusing to patients. These new devices not only increase patients’ cognitive workload, but they also can come dislodged prior to pre-programmed injection, leading to stress and uncertainty regarding whether a complete dose was delivered.

It is worth noting that the FDA has recently begun focusing on the critical factors described above in their evaluations and related responses to drug approval submissions. Those currently preparing formative or summative studies to report to the FDA should plan for and expect HFE performance verification questions related to the drug delivery device issues presented in this article.

The author would like to thank Chris Morley, senior human factors engineer, and Kim Dalton, research associate, both of MAURO Usability Science, for their review of this article.

Charles L. Mauro, CHFP, is founder and president of MAURO Usability Science, a consulting firm specializing in advanced HFE research and optimization of complex medical devices and related technology. He is chairman of the Design Protection Section for the Industrial Designers Society of America (IDSA) and is the IDSA liaison to the U.S. Patent and Trademark Office (USPTO). He has lectured on product design and HFE research at MIT, Stanford, Penn, and other leading human factors research and engineering universities. Over his 47-year career, Mauro has managed more than 4,000 HFE research and development projects.