Biosimilar Discounting & Contracting: What Can The U.S. Learn From Europe?

Based on our research, the European Union (EU) is 10 years ahead of the United States with respect to biosimilar adoption. It is therefore unsurprising that the EU’s actions and policy decisions are having an impact on the U.S. market. In this two-part series, we will consider multiple facets of the EU’s influence. Part 1 will focus on payer coverage of biosimilars and the role of discounting and contracting. Part 2 will highlight the effects of the NOR-SWITCH trial results and how the EU’s view of biosimilars as therapeutic alternatives, rather than generics, has influenced U.S. policy.

Discounting And Contracting Of Biosimilars In The U.S. Immediately Following Launch

In the U.S., there are now three official biosimilars on the market: Zarxio (filgrastim-sndz), Inflectra (infliximab-dyyb), and Renflexis (infliximab-abda). However, their uptake has been slower than anticipated. As of January 2018, Zarxio has achieved a 15 percent share of the filgrastim market, while Inflectra has just 2.3 percent of infliximab volumes (data are unavailable for Renflexis).

Speculation regarding the slow uptake of biosimilars in the U.S. has centered on insufficient pricing incentives from biosimilars and more attractive contract offers on the part of the innovator products.1 Indeed, a recent survey of payers indicated that current rebates/discounts on innovator products were the biggest barriers to biosimilar adoption.2

Initially, the conventional wisdom in the U.S. was that biosimilars would offer modest savings, with most anticipating discounts of 10 to 20 percent. At this point in time, it appears that the innovator products have been able to resist biosimilar entry with those discount levels.3  It will be interesting to see if the pricing strategy of Renflexis (35 percent discount relative to Remicade [infliximab]) changes the situation.

As a reflection of current biosimilar pricing strategies, current coverage policies place biosimilars as nonpreferred across the majority of 10 plans, and in the example of Aetna, both the branded product Remicade and biosimilar Inflectra are preferred infliximab products. 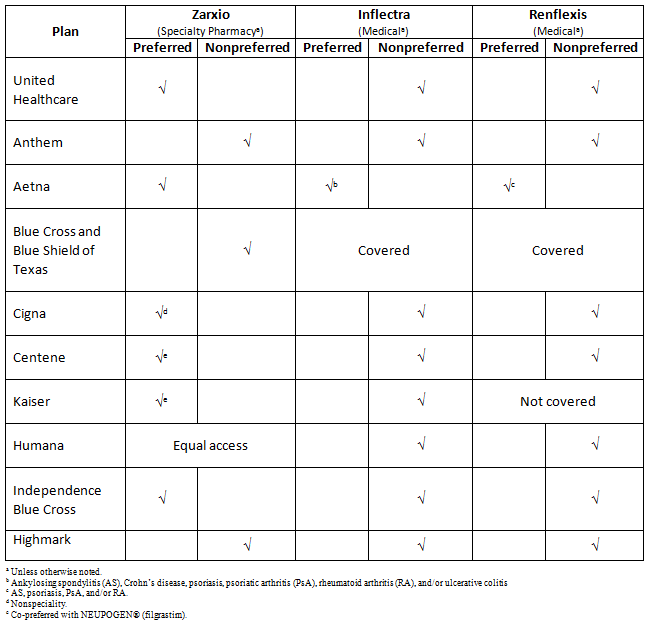 Our research has revealed that across 10 major U.S. health plans, originator products are still preferred over biosimilars. By way of example, Zarxio was covered under the specialty pharmacy benefit by the majority and was only preferred by approximately half of plans. Meanwhile, Inflectra and Renflexis were primarily covered under the medical benefit as a nonpreferred agent — or they were excluded altogether. The formulary status of the Remicade biosimilars highlights how aggressive rebating and contractual terms can impact coverage, and how biosimilar manufacturers need to work on devising an appropriate pricing strategy to garner market share.

When it comes to biosimilars, EU countries have implemented a range of different policies to generate pricing pressure, drive adoption, and ultimately yield cost-savings for their healthcare systems.

In terms of pricing, multiple mechanisms are being used to secure discounts.5 For example, a number of countries (e.g., Austria, Finland, France, Poland, Portugal, and Spain) impose mandatory discounts on the list price (either for the biosimilar, the originator, or in some cases both). Other countries like Germany, the Netherlands, and the United Kingdom operate a free-pricing approach, allowing market forces to drive down prices. In almost all markets, tendering (a bidding process in which manufacturers are invited to submit their best price for the contract) is another important mechanism for securing net discounts — either at the national, regional, or local hospital level. A number of EU countries (e.g., Austria, Finland, Norway, Poland, and Portugal) have pricing policies that require the first biosimilar to offer a specific percentage discount off the list price of the originator. Follow-on biosimilars may be required to offer additional discounting.

Countries like Norway and Denmark famously achieved discounted levels of 70 to 80 percent off the originator for infliximab. Several factors played into this perfect storm, including moving many biologics from general reimbursement to the hospital tender. As both Norway and Denmark have universal healthcare as part of general reimbursement, neither prescribers nor patients are aware of drug costs. However, by transferring these agents into the hospital tender, the costs of these agents become the hospital’s responsibility.6 Additional tactics such as issuing national tenders and proactive patient and prescriber educational programs all play an important role in the success of biosimilar uptake in these two countries. Although the transition has not been as immediate in other markets, these discount levels are now commonplace in the Netherlands, Poland, Spain, and the United Kingdom, where biosimilar uptake is now very high. For biosimilar manufacturers in the U.S., offering these discount levels while volumes are still low may not make sense commercially. Since a more aggressive discounting strategy (along with other factors, of course) has led to significant uptake in European companies, the U.S. might consider the value of these approaches.

Zarxio entered the U.S. market with a modest discount of 15 percent compared to Neupogen. In early 2016, Sandoz decreased  Zarxio’s price and started making inroads with respect to market share. 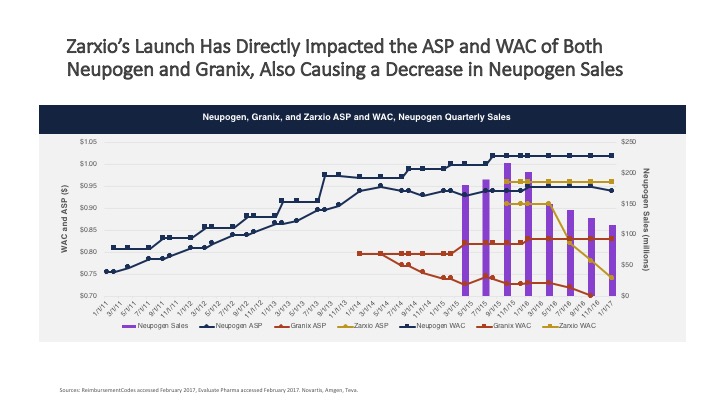 Another innovator, Remicade, was able to maintain share and the majority of revenue in the United States in 2017 because the biosimilar offered limited potential for savings, thereby limiting payer push toward its use. In Johnson & Johnson’s 2017 fourth quarter earnings report, forecasting noted an increase in biosimilar activity likely impacting future sales.7

Finally, in an identical survey we conducted with U.S. payers in 2015 and 2017, we found that the expectation of biosimilar discounting has risen over the past two years from the 10 to 20 percent when biosimilars were introduced, to a majority of payers considering a 30 percent discount as a floor.2 This shift in pricing expectations may be a direct reflection of the EU policies discussed above.5

Payer expectations and behavior around discounting and formulary coverage are only part of the story. Other aspects and influences from the EU are at play in the uptake of biosimilars in the U.S. market. Stay tuned for the second article in this series, which will discuss the EU influence on interchangeability and biosimilar perception in the U.S.

Todd Edgar, PharmD, is senior VP of specialty services at Precision for Value. He has over 20 years of experience in managed healthcare and over 15 years experience working with pharmacy benefit managers (PBMs). Edgar’s expertise lies in services and rebate contracts in the commercial and Medicare space, customer-facing responsibilities (PBM clients), financial analysis, benefit design recommendations, Medicare Part D, and formulary development. He received his M.S. in hospital pharmacy from the University of Kansas his PharD from Samford University.