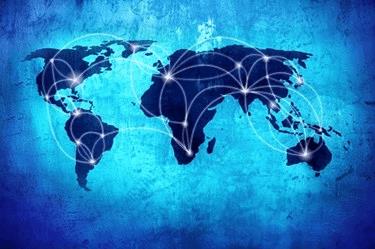 The biosimilar market is expected to grow from $1.7 billion in 2014 to $30 billion by 2020, representing a CAGR of 62.1 percent. The launch of Remicade and Enbrel biosimilars is anticipated in 2016. While the U.S. is the largest biologics market globally, it currently accounts for only a small part of the global biosimilars market. The emergence of a supportive regulatory approval pathway for biosimilars and patent expiries on major biological products are expected to change this situation. Europe is the largest contributor of biosimilar revenues worldwide. Strong government support and established incentive mechanisms have boosted rapid growth. However, above average pricing discounts — as evident in the past few tenders — have created margin pressures.

Although the products have been available elsewhere — including Europe — for several years, physicians and other key stakeholders in the U.S. have only recently begun to anticipate their arrival. While current regulations allow for the approval of generic copies of conventional pharmaceuticals at greatly reduced costs, until recently there has not been the technology nor the regulatory pathway with which to introduce lower-cost versions of biologics. The U.S. Congress recently enacted legislation to enable and encourage the introduction of biosimilars and follow-on biologics, paving the way into an untapped market. However, many obstacles to a clear abbreviated regulatory pathway and market uptake in the U.S. remain, such as guidance regarding clinical research requirements, naming convention, and end-user acceptance.

The biosimilars market has the potential to disrupt the healthcare industry by exponentially increasing market access and providing the highest quality at the lowest cost to an untreated patient population which cannot afford $100,000 therapies.

1. Several blockbuster biologics — Humira, Remicade, and Lantus — are losing patent protection over the next five to 10 years

The expiration of patents and other intellectual property rights of biological innovators over the next decade (Figure 1) opens the opportunity for biosimilars to enter the market and increase competition among producers of biologics. 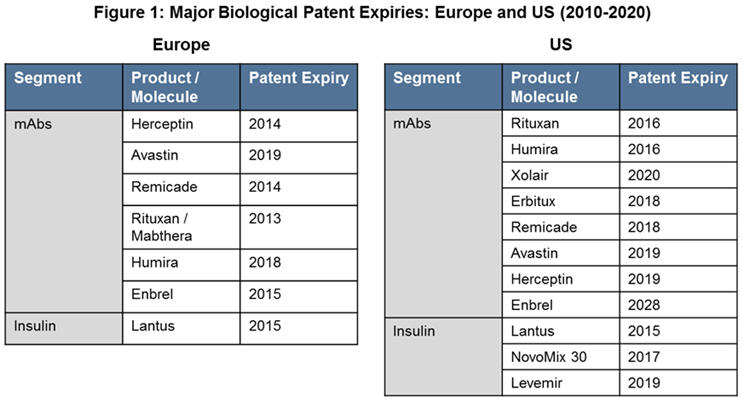 Key therapy areas such as oncology (mAbs), diabetes (insulin), and rheumatoid arthritis (mAbs) will spearhead growth during 2016 through 2020.

2. Physicians, patients at center stage as prescription and usage rates are linked to ROI models

Figure 2 highlights key reasons that impede adoption. Efficacy, safety issues, and interchangeability or substitution practices remain key concerns, especially in the U.S. market. These dynamics make it challenging to estimate the growth trajectory of the U.S. market, which is expected to take off after 2020. 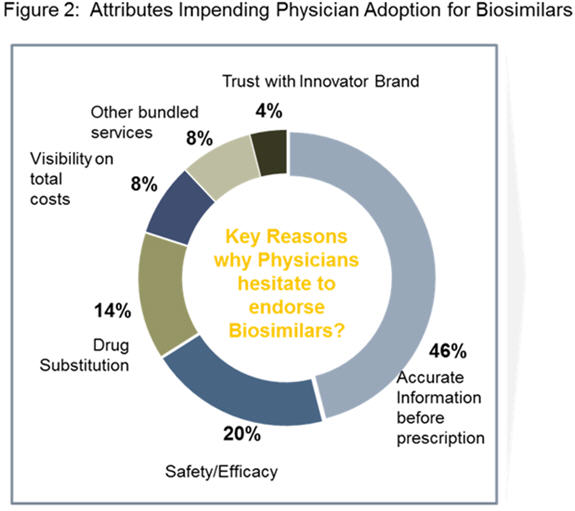 It’s no secret that innovator biologics — in particular, the monoclonal antibodies (mAbs) — come with a high price tag. These price tags have led to many governments promoting the use of biosimilars. A few European countries, such as Germany, Denmark, and the Netherlands, have introduced various incentive programs and established strategic models for discount pricing and rebates. Remicade (infliximab), for example, is mainly indicated for Crohn’s Disease, Rheumatoid Arthritis, Ulcerative Colitis and Plaque Psoriasis. Its European patent expired in 2015, paving the way for biosimilars. Remicade’s biosimilar Remsima has been commercialized in Europe since 2014. Remsima started its sales in Europe with a 39 to 40 percent discount from the list price of Remicade and captured 6 to 7 percent of the market in 2014. But in 2015 to 2016, the discount rose to almost 70 percent, thus supporting increase in market share to as high as 45 to 50 percent of the Remicade market. Infliximab biosimilars are expected to save £ 90 million for the U.K.’s NHS alone

4. Clash of global titans brewing in Europe and emerging markets

The increasing number of biosimilar approvals in Japan, India, and Latin America, as well as the financial strength of the big pharmaceutical and generic companies, are reasons for the emergence of new market participants. In particular, Asian participants such as Celltrion, Samsung Biologics, and Dr. Reddy’s are aiming to aggressively enter the global markets and challenge multinational companies. They have sunk enormous cash to produce technological breakthroughs in both upstream and downstream biomanufacturing processes. Celltrion spends approximately 30 to 40 percent of sales on R&D and keeps ambitions to garner half of the global infliximab biosimilars market.

Biosimilar products need to be “only similar as possible” to the innovator product while still offering a unique market differentiation from the innovator product. The norm for biologic administration used to involve administering the biologic with a simple injectable that did not have volume control. They also lacked the ability to monitor dosing and compliance. Thus, biosimilar companies have an outstanding opportunity to differentiate on something other than price. Inclusion, or bundling, of drug delivery devices is becoming the new norm. A prime example of this is AbbVie’s partnership with Unilife for its Humira biologic. Unilife offers a system that enables patients to sync their device with their mobile phone.

However, biosimilar companies using devices like any combination product have to fulfill the essential requirements for safety and performance of the device used in combination. With evidence to support improved compliance, higher safety, controlled dosing, and ease of use for patients with advanced diseases, the delivery device becomes a valuable source of differentiation for biosimilars and an exceptional leverage for biosimilar companies.

6. What’s next: “uberization” of the healthcare industry?

The rise of the Gig economy (i.e. Uber) has created a vast pool of healthcare workers in alternative arrangements. As “uberization” continues to catch on, more people are gravitating toward freelance healthcare work. This talent pool can provide support services to patients and physicians and demonstrate the value of biosimilar products. This paradigm shift will push biosimilar companies to establish a new business model that can demonstrate safety, potency, and efficacy of biosimilars to patients, physicians, and payers. This business model will likely be a product and service model (i.e. kidney dialysis treatment). Biosimilar companies could find they must team up with pharmacies or prescription benefit managers (PBMs) to supply their products.

During the next five years, Frost & Sullivan estimates that various key stakeholders, including regulatory agencies, payors, long term care institutions, key opinion leaders, and patients, will feel increasingly confident about the prescription of biosimilars, and adoption rates will further increase.