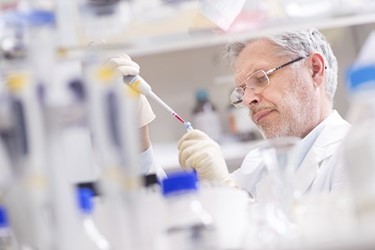 Size exclusion chromatography should separate proteins only according to their hydrodynamic radius (size). However, the dextran and agarose components of size exclusion chromatography resins contain residual amounts of ionic groups; proteins having the opposite charge to the resin might bind due to ionic interactions while proteins with the same charge as the resin are subjected to ion repulsion and will elute earlier than expected. In fact, ion exchange interactions at low ionic strengths (1) have previously been described when the pH of the mobile phase was lower or higher than the pI values of the proteins. For some proteins, hydrophobic interactions have also been observed at high ionic strengths.

Cross-linking agents used in the manufacture of resins may introduce hydrophobic sites adding to range of modes of interactions between the resin and protein. These undesirable interactions may be decreased by adjusting pH, ionic strength, or through certain additives. Often, proteins and resins possess both ionic and hydrophobic properties and the composition of the mobile phase needs to balance these contrasting effects to achieve required separation.

This study describes the effect of pH and NaCl concentration on retention volume using the DoE approach. DoE allows us to use a minimum number of experiments, in which we systematically vary several experimental parameters simultaneously to obtain enough information. The traditional setup with one-parameter-at a time only covers a limited part of the experimental design space and an optimum or minimum might be missed. In addition, the traditional setup does not take into account the fact that experimental variables can be dependent of each other (interaction).

Here, the effect of buffer conditions was studied on proteins with acidic, basic, and hydrophobic properties on Superdex 200 Increase 10/300 GL prepacked chromatography column.