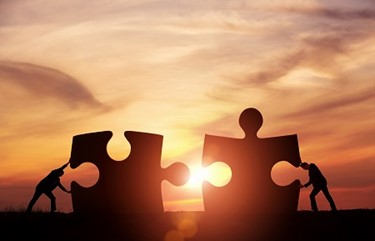 Mylan’s roots are firmly based in the small-molecule generics business; however, the company has positioned itself as a strong competitor in the biosimilar field with the help of key strategic partnerships in recent years. Mylan has two major partnerships with Biocon and Momenta that form the majority of its biosimilars pipeline (Mylan is not developing any biosimilar candidates internally). Overall, Mylan has strategic partnerships with seven different biosimilar developers that have given the company a market-leading and comprehensive biosimilar portfolio, covering 75 percent of the top 20 selling biologics available in the current market.1 Currently, Mylan has the largest identified developmental biosimilars portfolio of any company, with 22 biosimilar candidates, of which two are approved in the United States (Ogivri — a trastuzumab biosimilar and Fulphila — a pegfilgrastim biosimilar) and one approved in Europe (Semglee — an insulin glargine biosimilar). Mylan also has five biosimilar molecules under review for EMA approval and one non-innovator biologic under review for FDA approval (see Table 2, Mylan’s Biosimilar Pipeline).

At a recent investor day presentation, Mylan president Rajiv Malik highlighted the importance to the company of focusing on biosimilars. With multiple strategic alliances under Mylan’s belt, Malik emphasized that the company is positioning itself as a “partner of choice” regarding biosimilars. 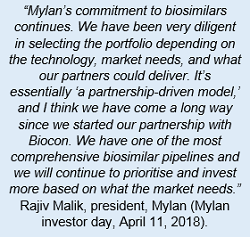 Mylan’s first partnership was with Biocon, an Indian biopharmaceutical company with experience and expertise in developing monoclonal antibodies and other biologics for emerging markets. In that deal, Mylan has exclusive commercialization rights for biosimilars of monoclonal antibodies and other biologics in the U.S., Europe, Canada, Japan, Australia, and New Zealand, and for insulin analogs in the U.S., Canada, Europe, Australia, and New Zealand. Mylan agreed to an up-front payment to Biocon, together with cost-sharing and supply agreements, and profits to be shared in developed markets.2

This partnership is mutually beneficial; Biocon lacks commercialization experience as well as payer/provider familiarity in developed markets, which Mylan provides, while Mylan has been able to leverage Biocon’s manufacturing knowledge and capabilities in a lower-cost market. Furthermore, Mylan’s experience in navigating regulatory systems in developed markets will also benefit Biocon. Research from Decision Resources Group suggests that the level of trust in a manufacturer is one of the key factors influencing physicians’ likelihood to prescribe and payers’ likelihood to reimburse a biosimilar,3 and that companies more familiar to physicians and payers are likely to see more uptake, meaning Mylan’s reputation should be beneficial in fueling uptake of Biocon-manufactured biosimilars in developed markets.

The partnership with Biocon has put Mylan in a competitive position for several biosimilar candidates; however, Mylan has also grown its biosimilars portfolio through other deals. In 2016, Mylan signed a deal with Momenta for six biosimilar products, which included biosimilars of the autoimmune therapy Orencia and ophthalmology agent Eylea, diversifying its biosimilar pipeline from what was available through its deal with Biocon. Mylan’s agreement with Momenta involved an up-front cash payment, with Momenta set to receive further milestone payments. Each company will share equally in the costs and profits with respect to the products.4 However, in late 2017 this deal suffered a setback, as Momenta announced that its most advanced biosimilar in development, its proposed biosimilar molecule to Orencia, did not meet its primary pharmacokinetic endpoint in a Phase 1 study. The companies are still working together to analyze next steps of the program.5

While Mylan’s partnerships with Biocon and Momenta form the majority of its biosimilars pipeline, the company has further grown its biosimilar portfolio through other partnerships to capture biosimilars of top-selling biologics and realize their commercial potential. In November 2016, Mylan entered into a supply and commercialization agreement with Mabion, a Polish biotechnology company, for a rituximab biosimilar in Europe. Under the terms of the agreement, Mylan paid Mabion an up-front payment and committed to additional milestone payments subject to filing and approval of marketing authorizations and commercial launch in key countries, as well as royalties based on annual net sales.6

Mylan followed a similar strategy to broaden its biosimilar portfolio through one-drug deals with Revance for an onabotulinumtoxin A biosimilar7 and with the South Korean company Chong Kun Dang (CKD) for a darbepoetin alfa biosimilar. Malik has made this strategy clear, stating, "If we don’t have a product and the market needs it, we’ll go and find it.” He further explained, “The rituximab biosimilar deal in Europe is a good example; we didn’t have it in the portfolio for either Biocon or Momenta, but we could find an opportunity with Mabion.”1 Interestingly, there are already two rituximab biosimilars available in the European market, Celltrion/Mundipharma’s Truxima and Sandoz’s Rixathon, meaning Mylan’s biosimilar is set to be the third rituximab biosimilar to come into the European market. Although Rixathon was launched just a month after Truxima, research conducted in Germany by Decision Resources Group indicates that at approximately 12 months post launch of rituximab biosimilars, a higher percentage of physicians prescribed Truxima than Rixathon;8 therefore, it will be interesting to see what pricing and go-to-market strategies Mylan will employ in order to attempt to gain market share for its late-entry rituximab biosimilar. 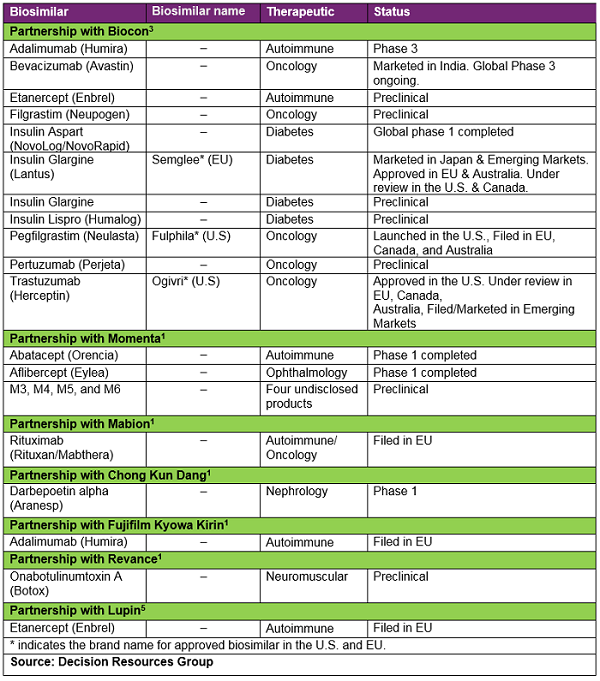 Mylan signed its latest collaboration with Indian company Lupin in June 2018 to commercialize its etanercept biosimilar in Europe, Australia, New Zealand, Latin America, Africa, and most markets throughout Asia.12 While there are already two etanercept biosimilars available on the European market, Sandoz’s Erelzi and Biogen’s Benepali, the etanercept biosimilar that Mylan had access to via Biocon’s pipeline is still in preclinical development, meaning it can access the market more quickly through this deal with Lupin. Lupin had already filed the product with the EMA at the time of the deal, and if approved, Mylan could launch this product in Europe by mid-2019, further broadening its presence in the biosimilars space.

Mylan’s company partnerships to date have expanded its access to different biosimilars and given it more rapid access to key biosimilar markets. These partnerships, which have expanded Mylan’s product footprint beyond its previous portfolio, have set the company up as a leading player in the biosimilar space, and based on the pace of recent deals and sentiment from investor presentations, its momentum in this field appears set to continue.

Jimmy Jacob, Ph.D., is a driven life science analyst with in-depth knowledge and expertise of the biopharmaceutical industry. Currently he is part of the biosimilars analyst team at DRG conducting both primary and secondary market research across four therapeutic areas — oncology, endocrinology, immunology, and nephrology. His role also involves developing forecast methodologies and providing in-depth analysis and insights for the biosimilars team. Prior to joining DRG, Jacob was working as a scientist in Medimmune and Horizon Discovery, focusing primarily on gene editing technologies.