How Will COVID-19 Impact Biosimilar Trends In The Top 5 European Markets?

It is undeniable that COVID-19 will have a significant impact on biosimilar uptake, particularly in European markets, where governments are expected to cover all the pharmaceutical needs of their citizens and where the crisis will lead to an important reduction of available resources. However, it is difficult to assess the extent to which this will occur. Let’s go back to the past to get some clues for the future.

On Sept. 15, 2008, Lehman Brothers, then the world's fourth largest investment bank, filed for bankruptcy, leading to a major global financial crisis. In the following graph, we can see the impact reflected in the annual growth of GDP in the main countries of the Euro Zone. 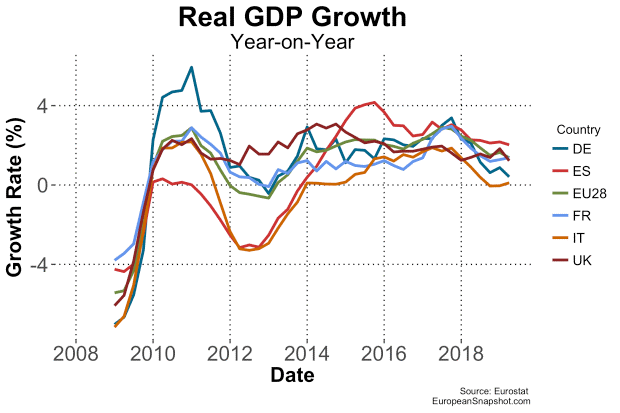 The effect this economic contraction had on pharmaceutical spending was devastating, especially in the Mediterranean countries (Greece, Italy, Spain). In the case of Spain, the market in 2018 was still lower in absolute value than it was one decade ago.1 This situation obliged European countries to implement several policies for healthcare cost control, mostly by reinforcing the use of generics, which, other than in Germany and the U.K., had seen a very low adoption rate until then. In the years that followed, penetration of generics increased significantly, and previous concerns about their supposed lower efficacy were definitively forgotten. Some of the measures that drove significant cost reductions included establishing prescription by active substance as the standard, allowing the pharmacist to automatically switch to the cheapest available option, and opening competition to non-EU companies, in addition to increasing the negotiation power of hospitals and pharmacy groups. 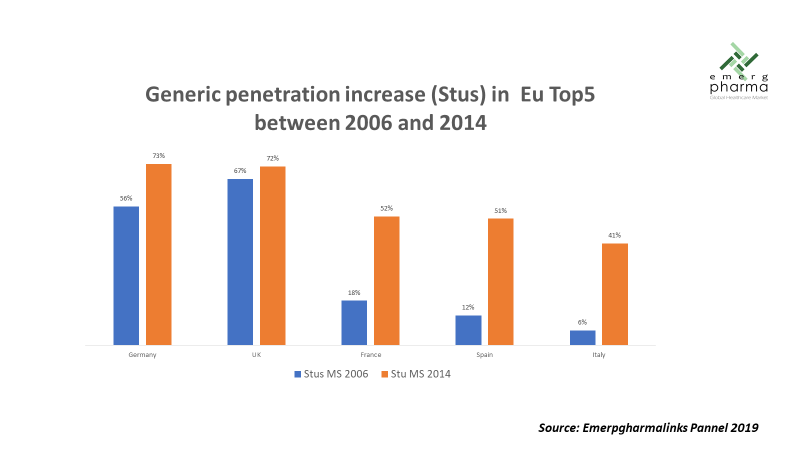 The increase in the use of generics had a very strong impact on final prices, both due to the lower cost of these products and also because they force brands to reduce their own prices so as not to be expelled from the market. In the countries of southern Europe, where tenders are very active, especially in the hospital field, reductions greater than 95% percent from the first tender after the expiry of the patent have been achieved in some cases. A recent study estimated the annual savings generated by generics in Germany alone to be more than 4 billion euros.2

The following graph illustrates the situation with an example of aribiprazole in the French market. The product was launched in 2015, and three years after patent expiration, generics accounted for 84 percent of all the market (in units). There were 15 competitors, including Otsuka (the original manufacturer) and two parallel trading companies, and the average discounts surpassed 90 percent.3 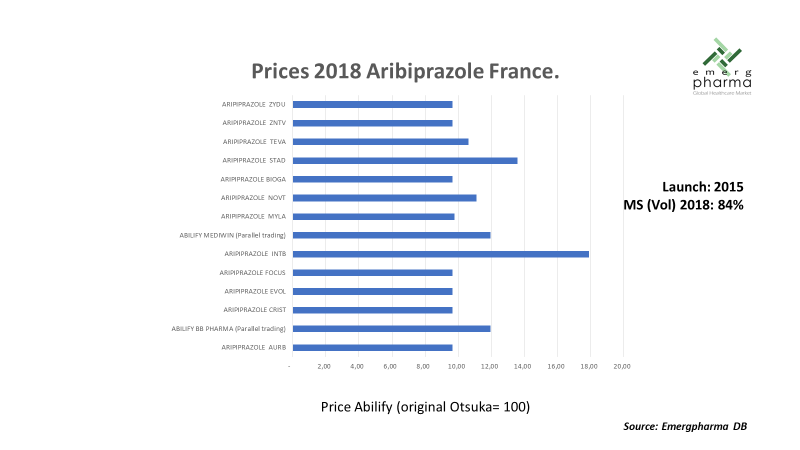 The World Bank estimates GDP contractions in 2020 of 6.5 percent in Germany and 8 and 9.2 percent in Spain and Italy, respectively, due to the impact of COVID-19. If this is so, we are talking about a crisis much deeper than that caused by the collapse of Lehman Brothers. It seems reasonable to think that the need to balance the accounts will lead European countries to put into practice all possible savings measures to avoid a health system collapse. However, there are several factors that make this endeavor more complicated than before:

In summary, the epidemic is expected to put additional stress on an already quite stressful situation. Hence, the use of biosimilars is among the main resources that governments can use to generate significant savings. Before the pandemic was declared, biosimilars were already key to keeping spending within acceptable levels, but now their need is even more obvious.

In Europe, 16 biosimilar molecules had been approved as of Dec. 31, 2019.6 The pace of approvals has accelerated in recent years, especially as a result of the arrival of monoclonal antibodies (mAbs), which have become the true growth drivers in this segment.

As can be seen in the following graph, in general terms, the adoption of biosimilars is still quite slow, with just 12.1 percent in volume in 2018, although in the mABs family the percentage rises to 33 percent. 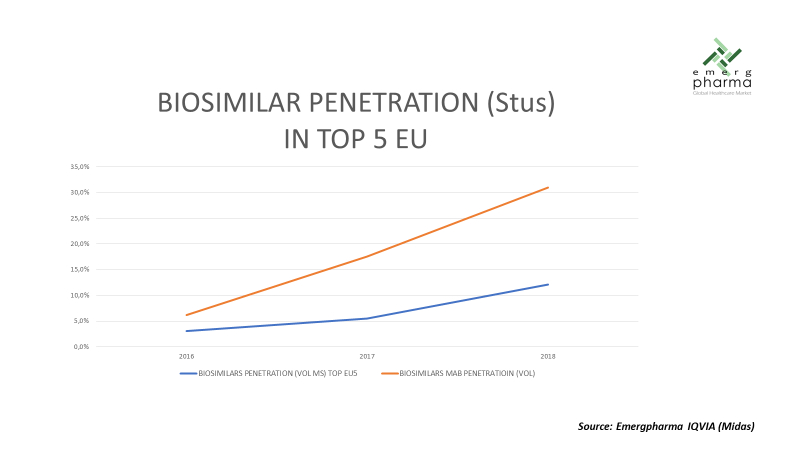 Although comparatively the mAbs are penetrating faster than the rest of biosimilars, the adoption curve is still slower than that of generics launched in a similar period, as shown by an example in the following graph. 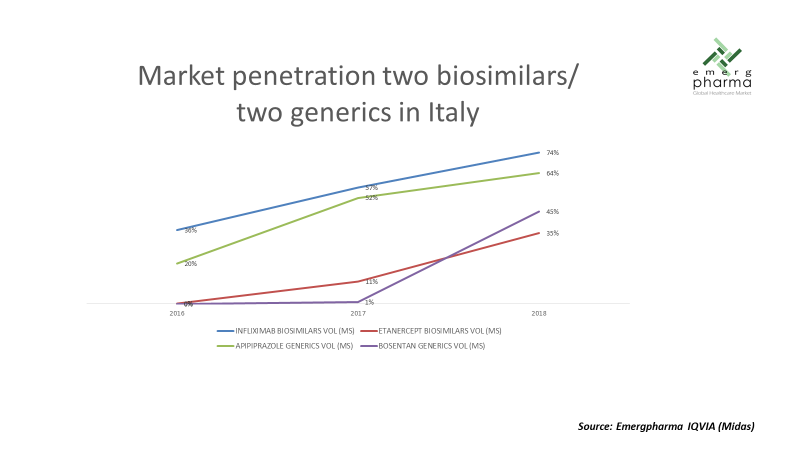 In relation to price erosion, we can also say that the first wave of biosimilars has been able to defend prices significantly higher than their equivalents in the field of small molecules, as can be seen in the following graph: 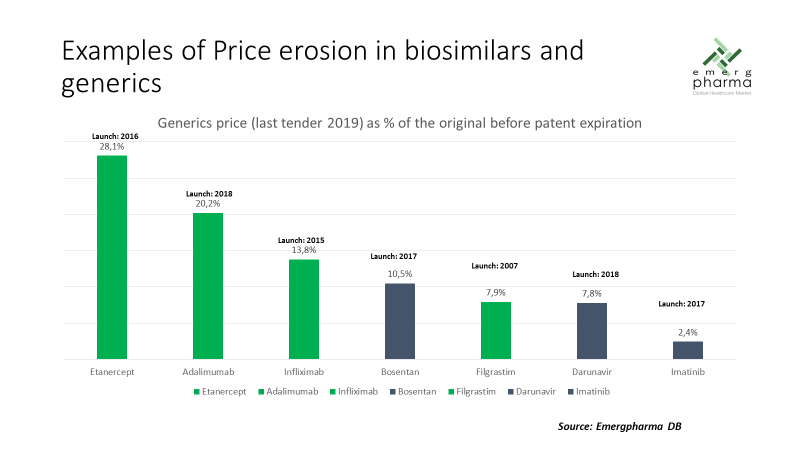 However, these comparisons were made prior to COVID-19.

As discussed previously, the first wave of biosimilars still shows a relatively low penetration rate, so there’s a huge opportunity for savings as the switching is increased. Sales of these approved biosimilars in Top 5 European markets were around $14 billion.

The so-called "second wave," composed of the biologics with expected patent expiration in the next five to seven years, represents an equally huge opportunity. The sales of these biologics in 2018 were $10 billion in the Top 5 European markets, but they are growing at an average rate of 12 percent, so, at patent expiration the size will be comparable to the first wave.

In summary, both segments together can potentially generate significant savings in a $25 to $30 billion market segment. Assuming, for example, 40 percent penetration and average price reduction of 70 percent, the potential savings would be around $7.5 billion per year, just in these five markets. We have to mention that our estimate for the second wave was made taking into account just the 17 molecules with the most potential, but our company is assessing another 18 cases where biosimilars would also be developed, some of them even with the patent already expired. 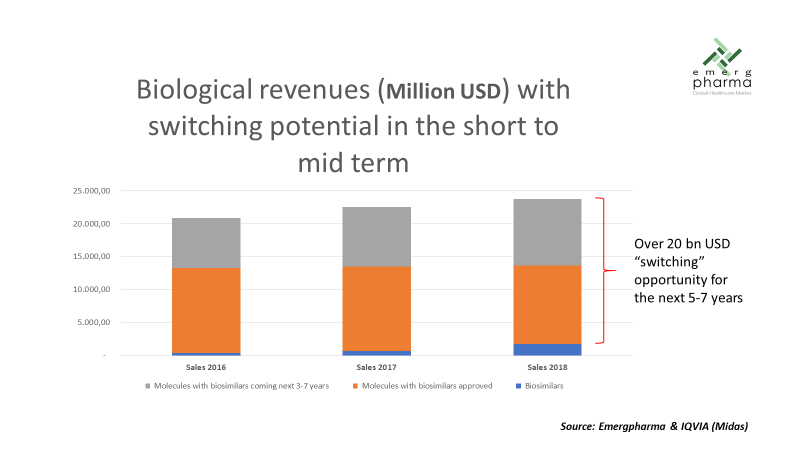 We still do not know the real impact the crisis caused by COVID-19 may have on the level of adoption of biosimilars and the erosion of prices in European markets. However, we can use what happened in 2008-2014 as benchmarking and at the same time draw some conclusions from the existing experience with the approved biosimilars. These are, in our opinion, some of the takeaways:

Those who follow my articles will remember that I have repeatedly mentioned the enormous opportunity that biosimilars represent for companies from emerging countries, of medium size, willing to enter in the R&D business but that are not (yet) in a position to make the big leap. The more than $2 billion required for developing an innovative drug is still too high a barrier, but for biosimilars, with a development cost between 3 and 5 percent of that figure, the barrier is much lower. For many of these companies, located mainly in China, India, or Korea, as well as other emerging countries, developing biosimilars represents a winning option for three reasons:

The distortion that these companies can generate in the market can be important: Since they do not have profitability among their direct objectives, they can accept margins that would be ruinous for companies that consider this segment in a pure profit center approach.

There are currently more than 40 adalimumab biosimilars in different steps of clinical development. So far, and according to data published by IQVIA, AbbVie has been forced to reduce the price of the product by between 70 and 80 percent in 2019,7 and it hasn’t been enough to avoid a significant and fast market share loss. In India, Zydus sells a vial of adalimumab for 9.000 Rs (108 euros),8 while the price of Humira in the U.S. (where the product is still protected by patent) is around 2,200 euros. It is not difficult to guess that a considerable price erosion in the coming years can be expected. In a tender’s “winner takes all” environment, few competitors have real chances to survive in the long term with this molecule.

On the other hand, biosimilars with apparently lower business potential have not been targeted yet, and therefore the possibility of a high number of competitors is low. We have been able to verify that when the number of biosimilars is low, price erosion remains at still acceptable levels, around 30 to 40 percent.

In short, it is essential that companies that want to compete with some probability of success in this new scenario make a careful choice of the molecules and about the marketing strategy to follow, especially in markets strongly dominated by tenders. Choosing whether to be the head of a mouse or the tail of a lion could determine one's survival.

Jose Ignacio Diaz is a senior global executive with over 20 years’ experience in the pharmaceutical industry, having held senior international roles with Big Pharma companies such as Roche and Sanofi and also with midsize local leaders in Europe, Asia, and Latin America. As founding partner and CEO of Emergpharma since 2008, Diaz has led more than 60 projects for the introduction of innovative drugs, generics, medical devices, and pediatric food in different markets. He is a recognized expert in oncology generics and biosimilars and has published several articles on the subject, with a special focus on commercial entry strategies, market penetration, and pricing.