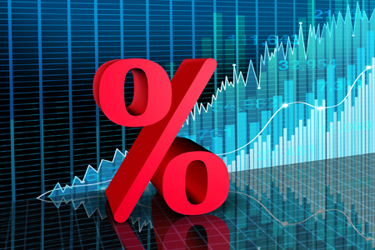 Rising interest rates, imploding cryptocurrencies, and erratic equities markets have upended some of the assumptions about risk and returns during 2022. For life sciences companies, however, many still need to raise capital to get products through development and to the market.

Smaller development-stage companies in the life sciences sector tend to move in much broader swings than the overall stock market. This combination of volatility and higher cost of capital, in the form of higher interest rates, places new demands on companies looking to raise money.

To use the capital asset model parlance, they are known as high-beta stocks that are volatile compared with benchmark equity indices, such as the S&P 500. When the market is rising, developing-stage companies tend to outperform the index, and the converse is true as well.

Rising interest rates have altered the risk and return dynamic. The “risk-free” rate — a one-month Treasury bill yield — has surged to more than 4 percent as of late November from 0.055 after a series of six rate increases by the Federal Reserve since March to tame inflation. However, interest rates for riskier fixed-income investments have surged considerably, with Triple-C rated bonds yielding about 16 percent, more than double from a year ago.

As fixed-income yields surge, equity values have declined. The S&P 500 started 2022 at nearly 4,800 and fell to 3,991 in late November, rebounding from lows of approximately 3,600 in October. Biotechnology has been especially volatile. The Nasdaq Biotechnology Index (NBI), which tracks the performance of 200 biotech and pharmaceutical stocks, was more than 5,300 in September of 2021 and has rebounded from lows below 3,400 in May 2022. The index has since rebounded to more than 4,200 in late November.

Know your own needs:  Some companies were able to raise money at lofty valuations in 2020 into early 2021 or worked out deals with special purpose acquisition companies (SPACs) that provided cash to fund development. As companies looking to raise capital, management teams need to understand their own funding requirements to get them to the next clinical inflection point.

When arranging for financing, it helps to understand the value of the company and its key assets to assure the terms are fair.

Manage spending during difficult times:  When money gets tight, it makes sense to focus on the development of a smaller number of assets. Diversification is smart when money is easier to raise and cash is available, but non-core assets should be shuttered during leaner days.  The focus must be to push the highest value programs with the best odds of reaching the market to boost shareholder value.

Understand your true cost of capital: Dilutive deals or borrowing at the wrong interest rate can be an exercise in value destruction.  Pre-revenue companies may not have much choice in the matter. However, executives need to think of achieving the next milestone to build value, reduce risk, and generate interest among investors or clinical partners. Sometimes, short-term financing is necessary to achieve that goal.

An executive team seeking funding can be better prepared in the months it takes between the initial meeting with a potential investor and receiving funding. Delays can happen when a company does not know what it wants or needs and sends mixed signals to potential financing partners.

Prospective investors or lenders will ask questions about assets, financial modeling, capital structure, the strength of intellectual property, and clinical/preclinical programs as part of initial inquiries. Ultimately, they will want to develop a financing package that makes sense for both parties, given the risks involved.

As due diligence begins in earnest, financiers will want deeper background about the company. A data room should have more details about financials and clinical operations. Financiers will want to speak with clinical staff, but they also will do some independent research to understand asset quality, the potential market being served, and the competitive climate. For example, how eager would an investor be to invest in an early-stage company whose clinical outcomes data isn’t as strong as a company with a competing Phase 3 program?

With all the best efforts behind due diligence, there are bound to be certain matters that are deal breakers in the eyes of financiers. Adverse clinical and regulatory actions are a barrier to completing a deal. Major shifts in financial models on short notice also can serve as a red flag that indicates an executive team does not appear to have a complete handle on the business. This scenario calls into question management’s ability to understand its cost structure and produce accurate forecasts.

The biggest deal breaker for investors, however, is dishonesty. Even small bouts of dishonesty can be symptomatic of bigger cultural problems at an organization and diminish credibility in the eyes of investors.

While times are uncertain and may be difficult for life sciences companies looking to raise funds, deals are getting done. It might not be as easy as it was during the halcyon days of the biotech boom, but investors are still willing to reward, and hopefully be rewarded by, innovation.

Boards, management teams, and financiers need to convey information transparently to one another and reasonable expectations must be set in this climate. Yet, companies need to consider what is achievable when financial resources are constrained, especially when both the cost of and time to complete clinical trials have increased in the past two years.

Despite the funding environment and higher interest rates, there is still a great deal of innovation taking place. We are seeing remarkable developments at different scientific conferences, addressing conditions considered untreatable only a generation ago. Tough times will challenge executives, but keeping the goal of improving clinical outcomes and patients’ lives while skillfully shepherding limited resources will be a win for investors and patients.

Jody Staggs was named president and interim CEO of SWK Holdings, a life science-focused specialty finance company catering to small- and mid-sized commercial-stage companies, in September 2022, after having joined the company in August 2015. Prior to joining SWK, Staggs served in various finance and executive roles at Annandale Capital, Alistair Capital, Highland Capital, and Raymond James. He co-founded PBS Capital, an investment management business investing in pharmaceutical royalties and healthcare equities. Staggs, who has earned the right to use the Chartered Financial Analyst (CFA) designation, was a Walton Scholar and graduated with a B.A. in finance from the University of Arkansas.