The European Biosimilars Landscape: What To Expect In The Year Ahead 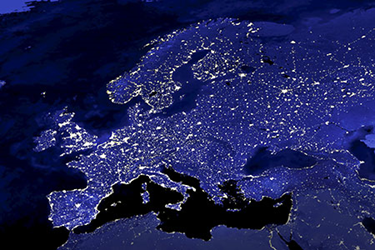 The European biosimilars market is the most mature in the world and continues to gather momentum. Since January 2017, the European Commission (EC) has granted marketing authorization for 19 biosimilar therapeutic medicines that reference seven distinct originator biologics, making it a record period in this region for biosimilar approvals. Overall, there are now over 40 EC-approved biosimilar products, across 15 different biologic classes (as of March 31, 2018).

Within the past year, there have been a number of biosimilar product approvals and applications referencing high-selling originator biologics Roche’s Herceptin (trastuzumab) and Abbvie’s Humira (adalimumab). Moreover, 2018 may see the European approval of biosimilars for Amgen’s Neulasta, an area of development that has been plagued by setbacks in recent years. With the EMA’s pipeline of biosimilar candidate reviews ever-expanding, 2018 is set to be an exciting year for biosimilar approvals and launches. 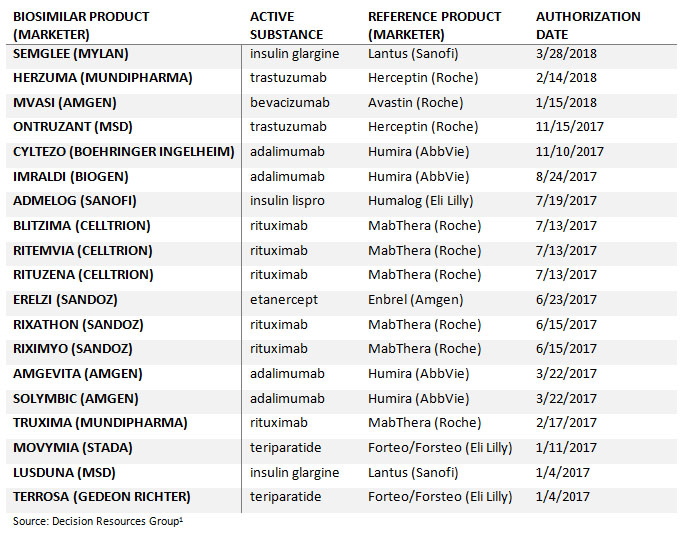 What Lies In Store For Trastuzumab Biosimilars?

Roche’s Herceptin (trastuzumab), which attained over $2 billion in sales across Europe in 2017,2 presents a lucrative opportunity for biosimilar companies. MSD and Samsung Bioepis’ Ontruzant is the first trastuzumab biosimilar to enter the financially attractive European market, having launched in the United Kingdom in March 2018. However, more trastuzumab biosimilars are set to follow Ontruzant’s launch over the next year, including Mundipharma and Celltrion’s EC-approved trastuzumab biosimilar, Herzuma, and Amgen’s and Allergan’s Kanjinti, which has received a positive recommendation from the EMA’s Committee for Medicinal Products for Human Use (CHMP).

Adalimumab Biosimilars Are Finally On The Horizon

Humira (adalimumab) is AbbVie’s flagship product and the world’s largest-grossing therapeutic drug, amassing global sales of around $18 billion in 2017.3 Although Humira has a dense portfolio of patents, its key supplementary protection certificate (SPC) is set to expire across the European Economic Area (EEA) in October 2018. A large number of companies that have either already obtained or are expected to obtain EC approval for their adalimumab biosimilar products are set to launch in Europe in the near future.

Humira is set to experience the greatest number of biosimilar competitors entering the market at the point of patent expiry compared to other reference biologics. In Europe, up to 10 adalimumab biosimilars may launch over the next year, and leading the pack, having already secured approval, are Amgevita and Solymbic (Amgen) and Cyletzo (Boehringer Ingelheim). The number of upcoming adalimumab biosimilar competitors is likely to trigger a price war across European countries, as companies vie for a dominant share of the adalimumab market.

We have already seen that uptake of infliximab and etanercept biosimilars (which reference Remicade and Enbrel, respectively, and are approved in immune indications overlapping with those adalimumab is indicated for) has been relatively healthy in several European countries. Rheumatologists and gastroenterologists surveyed by Decision Resources Group in 2017 reported that up to one-fifth of their biologic-treated patients received infliximab or etanercept biosimilars. Furthermore, European rheumatologists and gastroenterologists anticipated that up to half of their adalimumab-treated patients will receive an adalimumab biosimilar within two years of launch. Based on these indicators, and the fact that other immune biosimilars have been available for some time, aiding physicians’ familiarity and comfort with these products, the uptake of adalimumab biosimilars in Europe may well be faster compared to previous biosimilar launches in the immune therapy space.

No More Stumbles For Pegfilgrastim Biosimilars This Year?

Neulasta is Amgen’s successor to its first granulocyte colony-stimulating factor (G-CSF) product, Neupogen (filgrastim), which has experienced biosimilar competition in Europe since its first EC approvals in 2008. Neulasta’s patents expired in Europe in August 2017; however, to date, no biosimilars of Neulasta have launched as the development of pegfilgrastim biosimilars has proven to be a challenging endeavor for biosimilar developers, not just in Europe, but in the United States as well.

Europe is set to have another significant year of biosimilar approvals and launches in 2018, following the slew of biosimilar approvals in 2017. Biosimilars of trastuzumab, adalimumab, and pegfilgrastim are soon to become additions to the European biosimilars armamentarium, with the potential to rapidly capture notable market shares owing to the cost savings they will offer European healthcare systems. Examples from other biosimilars in the therapy areas that trastuzumab, adalimumab, and pegfilgrastim biosimilars occupy hint that there is likely to be a notable uptake of these products once they become available, given the current use of, and prescriber familiarity toward, existing biosimilars.

Hamzah Aideed is a senior business insights analyst and part of the Biosimilars team at Decision Resources Group, conducting both primary and secondary market research to provide in-depth analysis and insight into the biopharmaceutical industry.

Prior to joining Decision Resources Group, Hamzah gained experience working on various business issues within the field of life sciences at Consulting at McCann Health (formerly Double Helix), specializing in the design and execution of advanced qualitative and quantitative research methodologies. He holds an M.Sc. in biotechnology, bioprocessing and business Management from the University of Warwick and a B.Sc. in biological chemistry from Aston University, Birmingham.