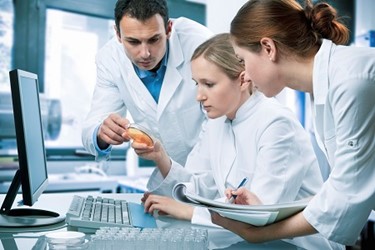 Western blotting, known also as immunoblotting or protein blotting, is a well-established and widely accepted form of protein detection and analysis. It is based on building an antibody:protein complex via specific binding of antibodies to proteins immobilized on a membrane and detecting the bound antibody with one of several detection methods. Most applications of Western blotting usually follow seven steps. For more information on these seven stages, read our blog on the 7-step Guide to Western Blotting.

Western blotting chemiluminescence is the most common form of detection using secondary antibodies conjugated with horseradish peroxidase enzyme (HRP). The addition of the detection reagent emits a light, which can then be captured either using specially sensitized X-ray films or a digital CCD-based imager.

X-ray films have long been the preferred method for protein detection in Western blotting. Typically, the process involves placing the film directly on the Western blot. Due to the proximity with the blot itself, X-ray films provide high sensitivity for detection of weak protein bands. However, high intensity signals can over-saturate in films making quantitative analysis harder. Moreover, if both weak and strong signals are present on the blot, exposure to x-ray film must be done to capture both, requiring time-consuming method standardization. Although some find film easy to use once standardized, it is difficult to detect both weak and strong signals on film, making limited dynamic range one of its major drawbacks. After X-ray film is developed, a digital image must be created for further computer analysis if the image is to be published. This is usually done by scanning the film with a densitometer or by taking a digital photo. A variety of commercial products are available for signal detection in Western blotting, such as Amersham Hyperfilm ECL.

Using X-ray films can also be more expensive over time. In addition to the cost of reagents and films, maintaining a dedicated dark room to develop the films can be costly. Film processing chemicals contain components that are hazardous to both the environment and the individual using it, so reagent disposal requires special care.