Will Asia Go Big In Biosimilars Adoption And Manufacturing?

Since 1984 when U.S. regulations favoring adoption of generics were enacted, the global generics market has grown to account for roughly 38% of global pharmaceutical spending and this portion is expected to increase to 43% in the next five years.1 Will biosimilars follow the generics trajectory in the next few decades?

While the biosimilars market is still in its early years, many industry watchers expect it to grow faster than all other pharma segments. With biologics accounting for almost a quarter of global pharmaceutical sales, the expiration of their patents will pave the way for intense biosimilar competition. Who will leverage the fast-growth potential of biosimilars?

Historically, Asia has led in generics adoption with approximately 40% of global generics spending coming from this region.2 With more than 300 biosimilars under development in Asia,3 could the region position itself as the center for global biosimilars manufacturing and adoption?

In this Executive Insights, L.E.K. Consulting analyzes how the biosimilars industry could evolve in Asia, examining the industry growth drivers, enablers and challenges it will likely face and how industry players can ride the growth waves.

Generics represent 55% of pharma spend in Asia, due to availability and cost-effectiveness. Similarly, the growth of the biosimilar industry will be driven by the following factors: 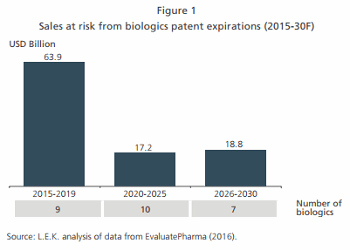 As they do in the generics industry, the key stakeholders (government, manufacturers, payers and physicians) will play important roles in driving the biosimilars industry. The key enablers to facilitate industry growth include government support to develop local R&D and manufacturing expertise, regulatory guidelines to evaluate drug safety and efficacy, payer support to manage drug costs, manufacturing and development cost advantages, and prescriber support to drive adoption.

Government support. Many Asian countries are accelerating the development of biosimilars; for example, South Korea has been the most aggressive in developing the biosimilars industry in the region, allocating 35% of its medical research budget in 2012 to aid local pharma companies. In addition to capital and generous tax breaks, the government also provides regulatory guidance to local biosimilars companies, and has set an ambitious goal of providing 22% of global biosimilars by 2020.4 China has also provided generous funding, with US$308B allocated from 2010 to 2015 for biotechnology including biosimilars, and an additional US$11.8B earmarked for 2015-2020 to advance innovations in biotech.5

Regulatory frameworks. Biosimilars, unlike generic drugs, are not exact copies of the reference drug, hence guidelines are needed to evaluate and establish the safety, efficacy and consistency of and structural similarity to the reference biologic. Asian countries have varying degrees of sophistication in evaluating biosimilars, with more developed countries such as Japan and South Korea adopting stringent regulations on par with EMA (European Medicines Agency) guidelines. India has opted for lower regulatory hurdles, with most candidates designated as follow-on biologics rather than biosimilars. China released a final guideline in 2015 with customized requirements for biosimilars, and previously approved candidates as follow-on biologics using the same pathway for biologics. To date, China and India have approved 96 and 66 follow-on biologics respectively, while Japan and South Korea have approved nine and seven biosimilars, respectively.6

Payer support. In Asia, governments are one of the key payers for pharmaceuticals and the driving force for the success of the generics industry. Government efforts to balance drug access and costs through public health schemes can provide strong support for the nascent biosimilars industry. In South Korea, biosimilars uptake accounts for a quarter of biologics volume due to a single-payer reimbursement system with a high emphasis on cost savings.

In China and Vietnam, government tenders and reimbursement schemes have allowed biosimilars to enter the public healthcare system, resulting in 60% and 38% market uptake respectively. Japan, which historically has struggled with generics adoption, has seen a rapid market uptake of biosimilars filgrastim (45%) and insulin glargine (9% over two months) due to cost-limiting regulations aimed at hospitals, where both reimbursement and hospital fees are capped by legislation.7

Cost advantages. Asia-based companies have benefited from a lower cost base relative to the U.S. and EU, which includes:

While materials and consumables costs may not differ significantly from costs in the U.S. or Europe, our analysis shows that lower capital expenditure and labor costs can still provide a significant advantage to local manufacturers in countries such as South Korea (see Figure 3). These cost savings can translate into lower drug prices while remaining profitable, enabling local companies to enter the biosimilar industry (see Figure 4). Furthermore, companies can leverage their existing competencies in the pharmaceutical value chain (e.g., logistics, packaging and marketing) to their advantage. While these cost advantages may diminish over time, early entrants can use the head start to build up their brand reputations. 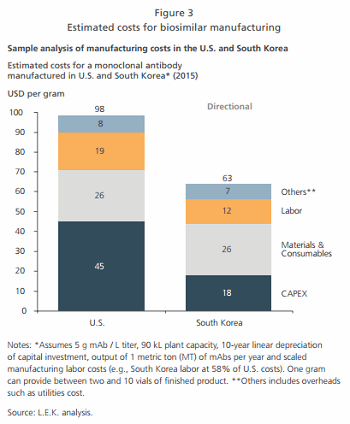 Prescriber support. Asian patients hold doctors in high regard; hence, prescriber support will be essential to biosimilars adoption. A survey in 2015 found that physicians across the region have different levels of understanding and perception on biosimilars safety, efficacy and interchangeability. Around 68% of medical respondents across Asia consider biosimilars and biologics to be interchangeable but only 37% were willing to prescribe biosimilars to new patients, highlighting the need for physician education on biosimilars and additional data on product efficacy and safety.9 As evidence of positive patient outcomes accumulates, physician stickiness to particular brands may develop and encourage wider biosimilars advocacy and adoption.10

With these enablers in place, biosimilars could follow the trajectory of generic drugs; however, the industry also faces challenges reminiscent of the early days of the generic drug industry.

Challenges In Growing Biosimilars In Asia

Like generic drugs, biosimilars will face a number of hurdles before they become widely acceptable to payers, patients and prescribers.

Awareness and perception. In Asia, brand perception is often equated with quality. Both physicians and patients show a strong preference for branded drugs despite the lower cost and proven efficacy of unbranded generics. For the nascent biosimilars industry, players should consider ways to improve awareness of their brands and convince patients and physicians of the quality and efficacy of their products.

Regulatory lapses. Regulatory lapses in the pharmaceutical industry have led to serious risks to patient safety such as the distribution of contaminated or counterfeit drugs. Examples include a contaminated biosimilar in India that resulted in eye inflammation in patients, and a heparin adulteration scandal in China that was linked to 81 deaths. While isolated incidents may slow down the adoption of biosimilars, multiple incidents may lead to a steep decline in adoption and threaten industry growth.

Innovators’ response. For innovators, lowering prices of biologics to match biosimilars is not a commonly pursued strategy to ward off biosimilar competition, and innovators have usually commanded a premium, which has allowed biosimilars to win market share. However, innovators may seek to influence prescribers and patients by identifying cases for preferential use of biologics in key patient segments and indications for which the biosimilar has not been tested.11 Partnerships with physician and patient groups, such as patient access programs, offer strategic pricing schemes (e.g., outcome-based and finance-based) to gain loyal advocates and may delay biosimilars adoption. Pricing and rebate negotiations with payers may also provide innovators with an advantage, but Asian countries including India, China, Japan and South Korea have adopted price controls to curb the practice and level the playing field.

Winning The Biosimilars Market In Asia

Competition in the biosimilars space is intense, and companies should consider the unique market characteristics in Asia and adapt their strategies accordingly.

Optimize product portfolio. The choice of product portfolio is a critical first step for biosimilars players considering the significant investment required for R&D and commercialization. In the portfolio selection process, companies should carefully consider product-therapeutic area combinations to pursue taking into account the disease burden, level of unmet needs in Asia as well as expected competition level. Furthermore, fit with company’s strengths such as therapeutic area and manufacturing expertise should also be considered in order to minimize potential risks in the future.

Prioritize target markets. The healthcare market in Asia is heterogeneous, with varying levels of development, complexity and customer dynamics influencing biosimilar adoption. Biosimilar uptake in developed markets such as Japan and South Korea will be influenced primarily by payer/government efforts to curb healthcare costs. On the other hand, developing markets such as China, India and Southeast Asia are largely dependent on patient spending power, given the large proportion of out-of-pocket healthcare spend in those countries. Due to differences in adoption and market potential, biosimilar drug companies should prioritize markets wisely to maximize investment returns on their portfolio.

Identify the right partner. A number of competencies are needed to successfully develop and commercialize biosimilars. In addition to manufacturing capabilities, regulatory expertise is needed to gain a foothold in highly regulated Asian markets. Financial strength is needed, given the high costs involved and long development times (e.g. four to six years for a single indication). Other competencies required include sales, marketing and medical capabilities to educate and drive brand awareness among physicians, patients, payers and other key decision makers. Players will need to assess their strengths in their target market and, if necessary, seek out partnerships to bridge gaps in their capabilities.

Expand prescriber base. Additional investment in physician education and building awareness will be critical to grow the number of prescribers beyond the existing users and drive higher volumes of prescriptions. Current knowledge of biologics generally lies with specialists in metro or tier 1 cities, which results in limited biologics adoption. Expanding knowledge beyond metro/tier 1 cities will be necessary to grow the biosimilar market in Asia. For example, Novo Nordisk was successful in increasing the number of doctors trained in diabetes management in developing countries such as Vietnam and Indonesia through its Train-the-Trainer program targeting internists and general practitioners.

Adopt new commercialization strategy. The target patient pool for biosimilar products is comparatively smaller than that for generics; therefore, companies need to fundamentally shift from the traditional sales and marketing approach that relies heavily on sales force promotion. Players need to be innovative in their commercialization strategy to achieve economies of scale effectively and maintain a profitable operation. Given the intense competition, companies should also find ways to differentiate and add value to their customers, which may require the company to go beyond just selling a product.

The foundations have been laid for the biosimilar industry in Asia, providing an opportunity for the region to become a global center for manufacturing and adoption of biosimilars in the next few decades. However, players will need to overcome potential hurdles in order to win in Asia. Despite optimism for growth, the industry has a long way to go before it catches up with the generics industry.

Zafar Momin is a managing director and head of L.E.K.’s Southeast Asia practice. Zafar has over 25 years of experience in strategy consulting and industry. He has provided strategic advice to a wide range of clients on strategy, operations, marketing and sales, mergers and acquisitions, and performance improvement.