EU5 Biosimilar Adoption: What Can The Past Tell Us About The Future? 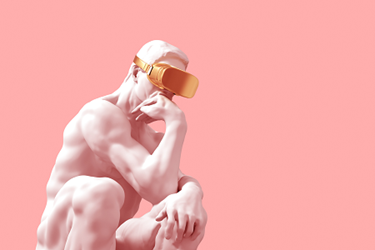 More than 13 years ago, Omnitrope (somatropin) received its approval in Europe on April 14, 2006. Since then, as of June 2019, 57 biosimilars from 15 different molecules have received greenlights, 27 of them in the last five years and 16 in the last year and a half. This acceleration is driven by the increasing need to generate savings that help keep pharmaceutical budgets under control. According to data from the consulting firm Fiercepharma,1 drugs approved in 2019 will generate sales of more than $20 billion in 2024. In addition, at least 19 new drugs in fields as diverse as cystic fibrosis, diabetes, various cancer types, Alzheimer's, multiple sclerosis, hemophilia, and rheumatoid arthritis got very promising results in the final stages of clinical development and are expected to be approved between 2020 and 2030.2 To complete the picture, therapeutic areas like oncology are reaching growth rates close to 20 percent in the main European countries as a result of the increasing use of biological therapies and the generalization of combination therapies.3 The top five EU countries, which represent around 65 percent of the total market, have universal health coverage systems, so this expense is one of the most important items in their public accounts.

In the aftermath of the great economic crisis of 2007, European governments were forced to set up adjustments to avoid a collapse in the system. Measures to promote the use of generic medicines were intensified and, thanks in large part to these efforts, a high penetration in all countries was achieved, especially in the hospital environment, exceeding in some cases 95 percent. Governments have also made significant progress in creating an open and transparent market, where global companies can compete as long as they meet the demanding quality requirements set by the EU. As a consequence, adoption of generics and price reduction have become more abrupt. As an example, the first generics to win an imatinib tender in Spain offered a price with a discount of 97.5 percent versus Gleevec’s original price. Although total savings have been huge, they are clearly insufficient to compensate for the increased use of biologicals, which are much more expensive to produce than small molecules. In Germany, for instance, biologic drugs under patent represent 29 percent of the total sales in the cancer segment, with only 3 percent of the total units sold. It is for these reasons that the use of biosimilars is not an option but rather, a need.

An article published in 20134 estimated the expected savings in the period from 2007 to 2020 to be between 11.8 and 33.4 billion euro, depending on the pace of adoption of new drugs and the price erosion. In this article, we review the penetration of biosimilars in the top five EU markets, with special emphasis on the years 2016 and 2018, as well as the key elements that could explain these results. The survey focuses on 23 of the 57 approved products for which we have data from at least 18 months in the five markets. These products belong to four groups: hormones (somatropin, epoetin alfa, follitropin, insulin), colony stimulating factors (filgrastim), MAbs (infliximab, etanercept, rituximab), and heparins (enoxaparin sodium). The countries reviewed are the U.K., Germany, Italy, France, and Spain.

The following table shows the market share (MS) in units per country from 2016-2018.

As you can see, the penetration has been very different depending on the country and the molecule. In the following sections, we will review the results for each type of product. 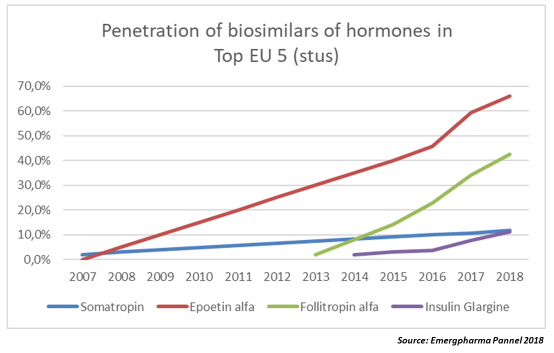 As shown in the graph, epoetin alfa and follitropin alfa’s biosimilars penetrated the market at an average of 10 percent per year, while somatropin and insulin glargine’s biosimilars hardly got more than a 2 to 3 percent increase yearly. In the case of somatropin, a possible explanation is the presence of five originator products in the market, while there are just two biosimilars. (See note 5.)

In the case of insulin, switching requires dose adjustment and patient management, which can lead to difficulties for the doctor.

The penetration of epoetin alfa in the U.K. and France is unusually low, which may be related to the greater use of a biobetter (darbepoetin alfa) than in the other three countries. Darbepoetin alfa is a hyperglycosylated EPO analog designed for prolonged survival in the circulation and with consequent greater bioavailability than epoetins. The differences found do not have an explanation related to the clinical management of patients, since both molecules have similar levels of efficacy.6

As can be seen in the following graph, filgrastim biosimilars already represent over 90 percent of the total market. 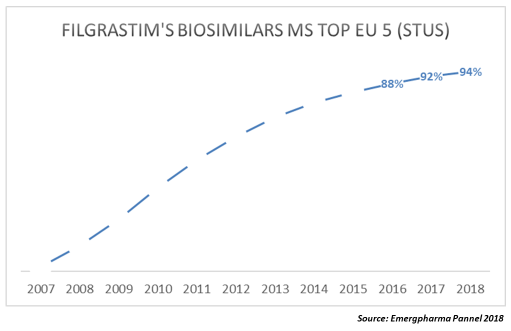 As you can see, the adoption curve is quite similar in all of the countries. 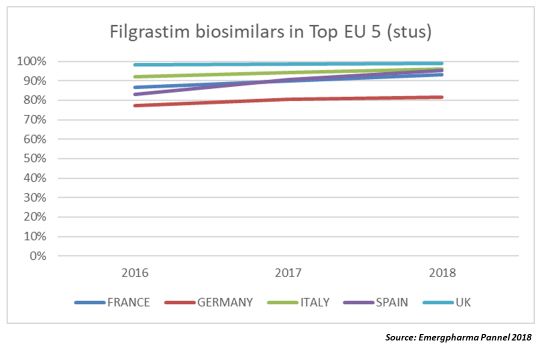 There are currently seven biosimilars of filgrastim marketed and the prices that are being reached in the tenders make the comparison with generics inevitable. In the last data corresponding to an auction held in Spain (2017, extended to 2019, OTSAKIDETZA), the biosimilar won the tender with a price that was 90 percent lower than that of the original Neupogen price at the time of its launch.

Although in recent years there have been multiple approvals of MAbs in European markets, we reviewed just three of them for which we have at least 18 months of data: infliximab, etanercept, and rituximab. 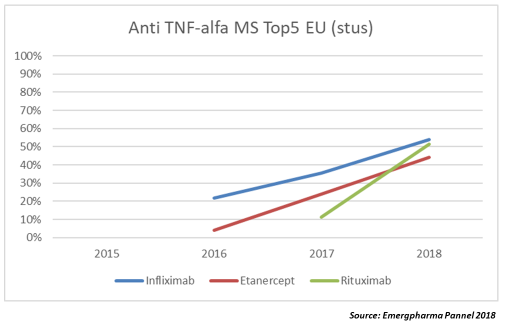 As reflected in the graph, the adoption curve is significantly faster than in the other families, with annual growth rates of between 20 and 40 percent. We still don't have enough data from the other two MAbs approved, adalimumab and trastuzumab, but it seems that the trend is for the penetration rate to be even faster. In the case of trastuzumab, which has six biosimilars approved but only a handful launched, biosimilars reached 10 percent of market share (MS) after one year, while adalimumab, which launched in Germany in October 2018, achieved 19.5 percent of MS in just five weeks and 28 percent after eight weeks according to Pro Biosimilars, the German group that represents biosimilar manufacturers in that country.

There is little data available, since the first sales of heparin biosimilars occurred in 2017. However, it should be noted that the penetration rate is clearly lower than that of the MAbs. 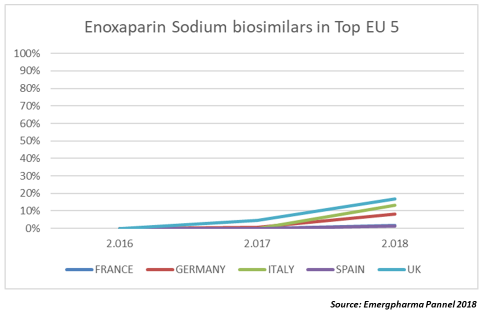 Only Italy and the U.K. exceeded 10 percent of MS in 2018. The reasons for this low level of adoption are not clear, although they may be linked, as in the case of insulin, to difficulties in the management of the patient or to some distrust by doctors toward these products. The most dangerous adverse effect of heparins is the incidence of HIT (heparin induced thrombocytopaenia). The presence of HIT antibodies varies among LMWHs (low molecular weight heparins) and even among the different enoxaparin biosimilars.

There is no homogeneous market with respect to the adoption of biosimilars among the top five EU countries, since the curves vary widely among countries and molecules. Except in some particular cases (insulin, epoetin alfa, somatropin), the U.K. has the greatest biosimilar penetration, followed by Germany. These two countries are the most active in promoting the use of biosimilars.  Italy, France, and Spain usually take longer to reach the same levels of adoption.

Byproduct families, such as anti-TNF, are by far the fastest penetrating, exceeding 20 percent annually and more recently reaching 40 percent. With some exceptions, MAb biosimilars achieve more than half of the market in just over two years. Obviously, such figures would not be reached if physicians were only prescribing to treatment-naïve patients. We can deduce there is a high percentage of substitutions in patients already under treatment with the bioinnovator.

Hormones show two different profiles: While biosimilars of epoetin alfa and follitropin alfa show penetration levels around 10 percent annually, those of insulin glargine and somatropin are much lower, despite having been in the market for five and 12 years, respectively.

Enoxaparin sodium biosimilars show a similar trend to those of epoetin/follitropin, around 10 percent per year, although important differences between countries have been identified. While penetration in the U.K. in 2018 was 17 percent, Spain and France achieved just 2 percent. Italy (13 percent) and Germany (8 percent) fall in between.

Finally, filgrastim biosimilars continue increasing in MS and are now close to 95 percent on average. It should be added that this penetration has meant a significant increase in the use of the molecule (19 percent between 2016 and 2018) and a great erosion in the price, to levels very similar to those observed in the case of generics.

The need to free up resources is likely one factor encouraging swifter regulatory approvals, as well as why we’re seeing such acceleration in the adoption curves. As the charts demonstrate, the uptake curves are becoming steeper, although there are still differences for countries that actively recommend the use of biosimilars as the first therapeutic alternative, such as the U.K. or Germany.

The main factors that favor the rapid adoption of biosimilars include:

The main barriers to biosimilar penetration are:

Five years ago, pharmaceutical companies that faced patent expiration of their drugs tried to curb the erosion of their sales by claiming that generics were not equivalent to their branded products. They managed to stave off generics for a while, but reality ended up imposing itself. The case of biosimilars is more complex, but few doubts exist about the need for these products in the different markets. As such, the measures to facilitate use of biosimilars, both in new and previously treated patients, will increase in the coming years. Although they were not included in this analysis, the Nordic countries have been at the forefront of Europe in terms of biologics replacement. Convinced of the safety and efficacy of biosimilars from the NOR-SWITCH and DANBIO studies, they adopted an attitude of full interchangeability at the pharmaceutical level, something that has not yet happened in the five countries studied. However, the first steps are already being taken. In November 2018, the German MoH introduced a bill on security in the supply of pharmaceutical products. The Gesetz für mehr Sicherheit in der Arzneimittelversor-gung (GSAV) seeks, among other things, to provide a legal framework for the automatic replacement of biosimilars by pharmacists in Germany. (Editor’s note: See related story.) Although negotiations continue, the proposal is that there are two substitution lists: one for doctors and one for pharmacists. The medical list would include information on how to switch to biosimilars, while the pharmaceutical company would indicate which drugs are substitutable at the pharmaceutical level. The details not yet resolved are the role of the doctor in treatment decisions and whether the replacement would be applicable to new patients or also to patients under treatment. However, it is reasonable to assume that a pragmatic approach will prevail in the end.

Jose Ignacio Diaz is a senior global executive with over 20 years’ experience in the pharmaceutical industry, having held senior international roles with Big Pharma companies such as Roche and Sanofi and also with midsize local leaders in Europe, Asia, and Latin America. As founding partner and CEO of Emergpharma since 2008, Diaz has led more than 60 projects for the introduction of innovative drugs, generics, medical devices, and pediatric food in different markets. He is a recognized expert in oncology generics and biosimilars and has published several articles on the subject, with a special focus on commercial entry strategies, market penetration, and pricing.