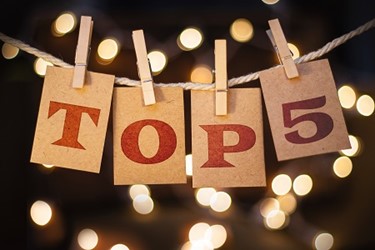 One of my favorite things to do at the end of the year is to take stock of what I felt were some of the most important, industry-changing developments in the biosimilar space. And though the industry always has taken large steps throughout the course of any year, 2018, in particular, has paved the way for an intriguing future in 2019.

For those of you who read my former Top 5 year-end articles in 2016 and 2017, you might find that 2018’s Top 5 developments are a little less specific. As the industry matures, I’m finding it harder and harder to single out one specific news headline as being the most influential. Rather, each of these Top 5 encompasses a series of events that, together, have further defined and carried this industry forward. Afterall, it doesn’t take one company launching a biosimilar or one national government policy to make a fruitful industry. We’ve known since day one — and have continued to learn along the way — that it takes a multistakeholder approach to build this industry. I feel this year’s list best demonstrates how a complex series of events can culminate and shape an entire industry.

At the end of 2017, one of the events I singled out as being the most influential for the industry was Amgen and AbbVie’s settlement securing the U.S. and EU launch dates of Amjevita, Amgen’s Humira biosimilar. What was so startling last year about one company settling for a 2023 launch in the U.S. is now a breath of fresh air after observing the outpouring of settlement announcements over the past year. Joining Amgen in arranging for a 2023 U.S. launch and a 2018 — or later — EU launch was Momenta & Mylan, Sandoz, Samsung Bioepis, Pfizer, and Fresenius Kabi. The only remaining holdout is Boehringer Ingelheim, which remains determined to launch its Cyzelto in the U.S. — and only the U.S. — prior to 2023. Obviously, many of the questions I posed last year about pricing and education in the U.S. over the next six years remain unanswered and will stay as such.

But 2018 also gave us a taste of what it was like for the biosimilar industry to grow up and become a fully-formed competitive market. Never have we encountered multiple companies launching biosimilars on the market at the same time (or within a matter of weeks of each other). And when we started hearing word of 80 percent discounts in the EU a mere two weeks after the biosimilars arrived, we realized just how nice staggered launches can be.

I consider these settlements to be both a positive and a negative occurrence in the market. It’s thanks to these arrangements that we have a Humira biosimilar market in Europe today, which has been a welcome development for both patients and health systems across the EU. But at the same time, increased European access comes at the expense of U.S. patients, employers, and insurers, all of whom must bear the burden of six more years of price increases.

Similarly, given the lack of transparency around which parties are providing the 80 percent discounts, industry members have voiced concerns about long-term sustainability of biosimilars if generic-style pricing is implemented this early on. As AbbVie has had decades to establish Humira and more than recoup its investment, there’s nothing truly stopping the innovator from playing discount hardball in order to limit patients’ and manufacturers’ European biosimilar experiences.

Overall, 2018 was a great year for the FDA. Not only did we see seven biosimilars approved, bringing the U.S.’s grand total to 15 (seven launched), but the FDA also has demonstrated keen awareness of the commercial barriers standing in the way of the U.S. biosimilar market. In turn, this led the agency to take a hard look at its current policies and the roles it can play in opening the door to a sustainable biosimilar market.

As such, in 2018, we saw the FDA do something unprecedented in the biosimilar space: It withdrew its highly controversial draft guidance on Statistical Approaches to Evaluate Analytical Similarity. Though the agency plans to draft a new guidance on this topic, its decision to withdraw this contested first draft revealed its dedication to promoting a regulatory pathway that won’t unnecessarily stymie development and bar biosimilars from the market.

This move also foreshadowed the highly anticipated launch of the Biosimilar Action Plan (BAP) just one month later. The BAP has been covered quite a bit, and much of what needs to be said about it already has been discussed in-depth on this site and many others. But a few of the tidbits I find most interesting and promising include the FDA’s interests in collaborating more closely with global regulators, as well as its willingness to explore the industry’s calls to eliminate bridging studies.

As I wrote following the FDA’s Part 15 hearing in early September, I was left with some concerns and frustrations following several of the industry and stakeholder presentations. However, the true star of the hearing was the panel of FDA experts. I was particularly impressed by the agency’s lines of questioning toward innovators about their loud cautions over biosimilar-to-biosimilar switching. Several of the FDA reviewers’ questions pushed the speakers to justify their opinions in ways I had not yet seen members of the agency pose questions. This could bode well for Pfizer’s as-of-yet unresolved citizen petition homing in on innovator’s questionable education efforts.

I recently wrote an article declaring 2018 “They Year of Real-World Evidence (RWE),” and I daresay I would not be alone in declaring this. After all, the past year was when we truly became aware of the extent of positive evidence surrounding the safety of single switches — and, to a still-limited degree — of multiple-switching, thanks to the publication of a literature review of 90 different switching studies. Similarly, despite Janssen’s efforts to question this literature review’s findings, researchers from the innovator company also came to a similar conclusion about the safety of infliximab single switches in a Janssen-funded literature review.

In addition to safety and efficacy, 2018 was notable for real-world evidence that began to explore the economic impacts of biosimilars on different healthcare systems, including the Veteran’s Health Administration (VHA) and Medicare, among others. Of course, safety and efficacy information that showcases biosimilars’ performance in more complex prescribing scenarios remains necessary (e.g., multiple switches between a biosimilar and its reference product or biosimilar-to-biosimilar switching). But we’ve also entered the age in which more questions are being asked about the impact of biosimilars on healthcare spending — especially in the U.S. It’s only by releasing data on biosimilars’ financial impact that the U.S. can determine how effectively biosimilars are being used and what could encourage increased usage and even greater savings in the long-run.

We’ve talked nonstop regarding the need to educate providers and patients about biosimilars, and after 2018, it would seem that hard work has finally begun to pay off. Earlier this year, we got word that the American College of Rheumatology (ACR) had released a new white paper in which it recommended the use of biosimilars. Just a week or so after this significant announcement, the American Society of Clinical Oncology (ASCO) released its own white paper entitled, “ASCO Statement: Biosimilars in Oncology.” Given the critical role oncologists will play as more oncology mAb biosimilars enter the market, ASCO stepped up to the plate to educate providers on several of the key concerns they may still have about safety and efficacy, naming and labeling, interchangeability, switching, substitution, and the overall value of biosimilars. I also appreciated the organization’s focus on the role oncologists can play in post-market surveillance, thanks to ASCO’s CancerLinQ system.

This past summer, one often-over-looked stakeholder group took a huge step forward by publishing a communication and information guide for nurses. This guide, which contains biosimilar education, conversational scripts to follow when speaking to a patient about a biosimilar transition, and real-world evidence case studies, is the first of its kind and will go a long way to training these critical healthcare workers.

Finally, as if all this biosimilar support wasn’t exciting enough, we recently learned a few weeks ago that one patient advocacy group, Creaky Joints, released a patient guide about biosimilars in inflammatory conditions. Much like the guides for physicians and nurses, this effort touches on the typical aspects of biosimilar education, underscoring (in patient-reviewed and approved language) how each biosimilar has the same risks, administration, and safety profile as the originator.

Since the beginning of my tenure in 2015 as the editor of this publication, I’ve heard tales of a fast-approaching time when we’d learn the limits of the biosimilar market. Questions always have been asked about the discounts companies could reasonably offer without undermining the market, as well as how many competitors a market could sustain. As we approached the end of 2018, I won’t say that we’ve finally gained clarity on these matters. But we’ve certainly seen how much can change in a short time for a manufacturer. Over the past two years especially, experts have begun talking about an inflection point, at which current biosimilar companies will decide just how much they’re willing to invest in biosimilars as the market slowly continues to take shape. And I’d argue, the latter half of 2018 has led us close to, if not straight into that inflection period. In recent weeks, there have been some big announcements clarifying just which companies we’ll be hearing more from and which will be fading into the biosimilar background in the coming years. Though these decisions could suggest dark biosimilar days ahead, I’d argue this is a positive, in that we will better be able to determine what competition will look like moving forward. Here’s the current breakdown:

Momenta Pharmaceuticals announced it would no longer be partnering with Mylan on five biosimilar candidates. It will only continue to develop its wholly-owned Humira biosimilar (though it decided to delay is FDA BLA submission originally planned for the end of 2018) and an aflibercept (Eylea) biosimilar in partnership with Mylan.

Boehringer Ingelheim announced it will no longer commercialize biosimilars outside of the U.S. — and this includes its EU-approved version of Humira. The company instead will be focusing solely on the U.S. market. (It remains the only company publicly pursuing interchangeability for Cyzelto.)

Sandoz announced it will no longer be pursuing U.S. approval for its rituximab biosimilar, which has already garnered a thumbs-up in the EU, Switzerland, Japan, New Zealand, and Australia. This decision came after yet another request from the FDA for additional data. This move clears the floor for Teva and Celltrion’s FDA-approved rituximab biosimilar to dominate the biosimilar rituximab market in the U.S. for the foreseeable future.

Where one door closes, however, another one opens, this time to the insulin market. Sandoz also announced a new partnership with Chinese company Gan & Lee to commercialize biosimilar versions of insulin glargine, insulin lispro, and insulin aspart in Canada, the EU, U.S., Japan, South Korea, Switzerland, Australia, and New Zealand.

This is great news in general for the insulin space, given Merck’s decision this year to end its partnership with Samsung Bioepis for the development of a follow-on (soon to be biosimilar) version of Lantus in the U.S.

Following its first EU biosimilar approval, Spanish biosimilar pureplay company Cinfa Biotech was snapped up by biosimilar commercialization guru Mundipharma. This leaves Coherus holding onto one of the last remaining pureplay titles in the biosimilar industry, given the news that U.S. biosimilar pureplay Oncobiologics (formerly pursuing an interchangeable Humira biosimilar) has rebranded as Outlook Therapeutics. The company now will be pursuing development of an innovative product for the treatment of ophthalmic conditions.