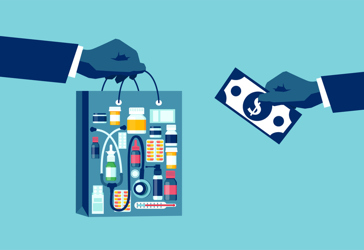 I recently published an article unpacking a discussion on market access barriers and incentives held a few months ago at the DIA Biosimilars Conference. To kick off the panel, I turned to two Biosimilar Development editorial board members Ned Pojskic, the leader of pharmacy and health provider relations for Green Shield Canada (GSC), the fourth largest private payer in the country, and Lauren Vela, senior director, of the employer coalition Pacific Business Group on Health (PBGH). In addition to learning more about the ongoing biosimilar transition program GSC launched with the help of several employers, Vela walked us through the biggest challenges that employers — particularly the largest U.S. employers — are running into when advocating for biosimilars with health plans.

Both Pojskic and Vela highlighted how important several (repetitive) messages are for continuing the biosimilar push. But it’s hardly a surprise that many of the issues facing biosimilar implementation are a side-effect of a system ill-equipped to incentivize the choice of lower cost competitors, whether it’s the fault of the buy-and-bill system or rebates.

In light of these challenges, it was refreshing to have Dr. Sameer Awsare of U.S. biosimilar champion Kaiser Permanente (KP) on the panel. Though the integrated delivery network (IDN) is a unique setting of care, there were still several lines of discussion that arose from KP’s best practices that sparked discussion on how other stakeholders can start to chip away at the systemic issues standing in biosimilars’ way.

Is It Time For A New Biologics Payment Strategy?

In a recent article and during the DIA panel, Awsare linked KP’s biosimilar success to the processes put in place which, first and foremost, protected the patient-physician relationship. In addition to setting aside time for each doctor to touch base with their patients to introduce the transition, buy-in from the chiefs of each therapeutic department were attained prior to even adding the biosimilar to the formulary. Therefore, by the time the physicians and pharmacists that comprise KP’s pharmacy and therapeutics committee met up, the biosimilar was essentially a shoe-in.

Though the vertical integration of an IDN can’t necessarily be replicated in other delivery models, Awsare emphasized that most of the strategies employed to gain physician, pharmacist, and patient buy-in were not necessarily unique to KP.

“Making sure that there are some types of organized efforts to get hospital or medical center physicians talking amongst each other, regardless of specialty, will be critical,” he said. “It was also helpful to tell our physicians about the savings incurred in Europe and the impact this had on increasing the number of patients that could be treated. I think that really resonated with our physicians and should with others.” Not only is this important from an educational standpoint, but it also promotes a long-term as opposed to short-term perspective, which, as we know, is a challenge biosimilars are facing today.

However, outside of the educational efforts, one big difference between how KP and other sites of care operate is how physicians are paid. As Awsare shared, all KP physicians are salaried. However, outside of the IDN setting, most of the biologics on the market today are given in the hospital outpatient setting, independent clinics, or at a doctor’s office. As such, reimbursement is carried out via the buy-and-bill practice, through which the physician is reimbursed the average sales price of the drug plus 6 percent (ish) (ASP+6) for Medicare patients. However, this factor can be much higher for commercial payers.

It was clear, based on how much nodding the other panelists did throughout the discussion of salaried physicians, that how products are paid for remains a hot topic among the payer and employer audiences. Over the past few years, the buy-and-bill method of payment has been increasingly controversial, especially as some biosimilars struggle to gain ground. Though there have been efforts proposed to encourage biosimilar prescribing under Medicare by altering the ASP+ equation, there are still concerns that buy-and-bill incentivizes use of the higher-cost reference product — or higher cost products in general for commercial populations. As vela explained, physician practices will generally not change practice for one population, so until all payers adjust payment incentives, we will continue to recognize buy-and-bill as an obstacle to biosimilar adoption. Similarly, tying a provider’s payment to the price of the drug itself can also add bumps in the road should employers explore site of care initiatives to reduce overall healthcare spending. Infusion centers may refuse to provide the biosimilar because they either will not be reimbursed for it, or they will not garner the revenue they need from a lower-cost treatment.

It should go without saying that ensuring that physicians and their sites of care are reimbursed is not a nicety — it’s a necessity. “This isn’t a matter of greed; buy-and-bill is how providers are paid,” Vela said. “We can’t just stop paying them. Instead, we need to come up with an alternate strategy for how they can be paid.”

Vela expects reimbursement practices will remain a big topic of discussion amongst employers moving forward, especially as some of the largest employers in the country move toward value-based accountable care delivery systems. These conversations are currently limited to a very small handful of employers, given that many U.S. employers do not have the bandwidth to take on such large-scale projects. However, some have begun contracting with an IDN and, together, the employer and IDN should establish their terms, divvy up the risks, and come up with performance measures and guarantees. Common practice today is for the employer to hire a TPA that reimburses the IDN using status quo practices. This must change.

Vela is particularly excited by these arrangements because they create greater accountability for the overall cost of care, which can also open the door to greater biosimilar usage. “When these contracts are in place between the employer and IDN, it gives the IDN the incentive to deliver care more efficiently because now it has accountability for providing that care and securing better outcomes.” And for employers, the goal is to see their employees realize better care. “Employers want the best possible outcomes because, in healthcare, it’s cheaper to have the right diagnosis at the right time and the best quality of care that leads to better outcomes,” Vela added.

Seeing accountable care organizations (ACOs) become more effective and prominent within the country is the “holy grail” for Vela because they encourage greater efficiencies and cost-effectiveness in healthcare. However, in addition to finding ways to make such programs available to a larger, more diverse groups of employers, she anticipates these partnerships will also require more innovative thinking on the payment front.

“We’re going to find that we need to realign incentives,” she added. “Large employers are saying ‘enough is enough’ and they’re starting to think about how they can create a mechanism that will pay the doctor differently. Physician revenues should not be attached to the drug.”

In order to promote greater conversation between employers and their health plans or delivery system partners — especially about a topic like biosimilars — Vela and Awsare both encouraged employers and groups like PBGH to establish or participate when possible in quarterly client advisory meetings. (For employer groups, these may be something that can be established.) In many cases, health plans around the country invite some of their most active employer members — both small and large employers — to discuss healthcare plan-related or commercial issues. But KP and PBGH also hold similar meetings to discuss anything that will be of value to patients, whether that be mental health, the opioid crisis, or biosimilars.

As Awsare added, it’s hardly novel that employers are striving more to dictate where their employees receive care; for instance, a large employer may specify that patients receiving knee or hip replacements have the procedure carried out at a particular site of care that has the highest quality of care and the best outcomes. The same discussions can and must happen about biosimilars with their IDN partners.